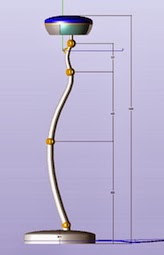 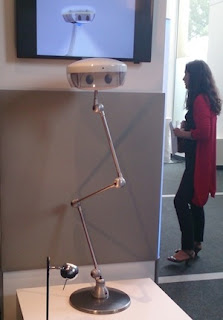 Pio, the robot from Lirobia I had the chance to create, is shown for the first time upon BNP Paribas/Cetelem’s 60th anniversary.
The delivery was tough; the revolutionary material used for its body, which hasn’t been studied enough, cracked during assembly. Fortunately, the electronic paper display, based on E-Ink technology, keeps the eyes wide opened and expressive.
That’s the lab mode. It allows clients to understand the line they shouldn’t cross, while challenging our teams and our reactivity. In less than 12 hours, we introduced a concept that matched our aim perfectly: the robot’s leg, designed by Jieldé, was released in the early 50s and the head, with its movements inspired by Bunraku and designed by Japanese Shinobu Nakagawa and French Alain Brux, from the years 2013 to 2033.
Pio is a tribute to Alberto Pio, printing sponsor of Greek teacher Aldo Manuzio, inventor of the modern book and an inspiration for Steve Jobs, Alan Kay and countless typography enthusiasts.
Publié par Bruno Rives à 10:28

Bunraku and next generation robotics

Bruno Rives, creator of the Lirobia robot, and myself, project manager, have been studying robots for ten years, living among and with us. We are convinced that, for its numerous applications, it is essential for the robot to express feelings, in order for the user to connect with him and develop a common touch.

In 2010, we planned a study trip on robotics in Osaka, Japan, and met there M. Shinobu Nakagawa. We were impressed by his visionary approach. M. Nakagawa was product designer at Panasonic and is now leading conferences at the Osaka University of Arts.
He has been involved in several projects in robotics with his students, with a main focus on designing motion and expressions of the robot’s feelings by mimicking puppets from traditional Japanese theater known as “bunraku”.

M. Nakagawa said, “When we talk to a machine, it responds and reacts. I think the basis for a good relationship between a human being and a 21st century machine must be found through a two-way communication. And I think robots are a symbol of this relationship.”

As soon as we introduced the project, we found an attentive ear from M. Nakagawa and now have the privilege to count him within our team. Based on specifications and functions we provided, you will soon discover and appreciate the conjunct effort from M. Nakagawa and Lirobia.